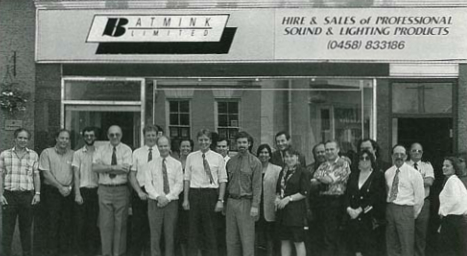 Batmink Ltd was started in August 1983 in the town of Glastonbury, Somerset. From the outset, the directors were determined that the company would not become a 'box shipper', but would concentrate on offering added value through technical expertise and facilities not usually available from a wholesaler.

Initially, Batmink Ltd was started by renting small office premises in Glastonbury High Street, within one year the company had been so successful that the high trade levels required somewhere for stockholding so it purchased a warehouse unit, still within the same town.  After six years Batmink acquired more office space on the high street to cater for its expansion.

Move on three years and a further expansion was taking place, linking all the premises into one large office and warehouse facility.  In 2000 the company purchased the former Bray’s Factory on Beckery Industrial Estate, adding additional warehouses along the way. Further expansions remain on the cards as the company continues to grow from strength to strength.

With a successful trading history and three major expansions, Glastonbury remains our home and plays a big part in our culture and heritage, even more so with its history of creative events and festivals, some of which we have had direct involvement with.

Batmink Ltd are committed to providing you with the best in support and customer experience.

If you would like to find out about servicing, repairs or returns please click here. If you can’t find the answer you are looking for get in touch.